A selection of both popular and distinctive temperate deciduous tree species planted in parks, gardens, or streets including excellent specimen trees with wonderful floral display such as Norbert’s magnolia, Japanese maple with beautiful autumn color, and the dark red leaved trees such as copper beech or black cherry plum. 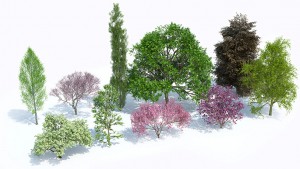 Medium-sized deciduous tree with a very compact and densely branched crown and a narrow, columnar form in youth, which gradually acquires a tear drop or oval-vase shape with age. Smooth, grey, rippling bark with distinctive muscle-like texture. Ovate, serrate, fresh green leaves are clean and attractive throughout the growing season turning golden yellow in autumn. Its small crown makes it very suitable as a street tree but also as a park and garden tree.

Medium-sized deciduous tree with a broad oval to pyramidal habit and scaly bark. Bright green, broadly ovate, alternate leaves, which might turn a beautiful yellow in autumn. Small, dark green flower-clusters each subtended by a pair of creamy-white, ovate bracts, which are said to resemble dangling handkerchiefs or doves resting on the branches. Ovoid greenish-brown fruits. Named after French missionary and naturalist Father Armand David, who was also the first westerner to describe the giant panda. This prized ornamental tree with its striking display of floral bracts in late spring was once considered to be the Holy Grail of exotic flora. It holds an Award of Garden Merit from the British Royal Horticulture Society.

Large deciduous tree with a conical, pyramidal to rounded habit and a usually low canopy. Attractive light or dark gray, smooth bark. Elliptic to ovate, glossy, smooth, alternate leaves. In spring, eye-catching foliage ermerges in copper red, which will fade to deep crimson maroon purple as the summer progresses, turning deep orange to copper in autumn. Although deciduous the leaves generally stay on the tree well into winter. The ornamental tree makes one of the finest specimens for large scale, temperate landscapes, perfect for giving contrast to an otherwise green landscape.

One of Europe’s largest native deciduous trees with a broad, rounded, spreading habit. Smooth bark on young trees, becoming thick and vertically fissured on old trees. Large, dark green leaves are pinnately compound, divided into pairs of lance-shaped leaflets, tipped by a single one, which creates a light feathery arrangement to the foliage. Leaves are often among the last to open in spring, and the first to fall in autumn often in dull green if an early frost strikes. Occasionally with an attractive green golden to yellow autumn color.

Large, vigorous, narrowly columnar deciduous tree with erect habit. The bark is grey or light green on young trees and new growth, but becomes dark grey, thickened, and ridged or furrowed on older, larger trunks. Ovate to rhomboidal bright green leaves, turning a bright golden yellow in fall before dropping. Propagation is by cuttings since this cultivar is a male clone.

Small, deciduous, upright tree with a rounded to pyramidal habit. Dark brown, furrowed bark. Deep blackish-purple leaves. Solitary, bowl-shaped, pale pink flowers are showy, and fragrant and open from deep pink buds before the leaves. These are followed in autumn by edible, dark red and spherical fruits. This cultivar, originating from the USA, has gained the Royal Horticultural Society’s Award of Garden Merit.